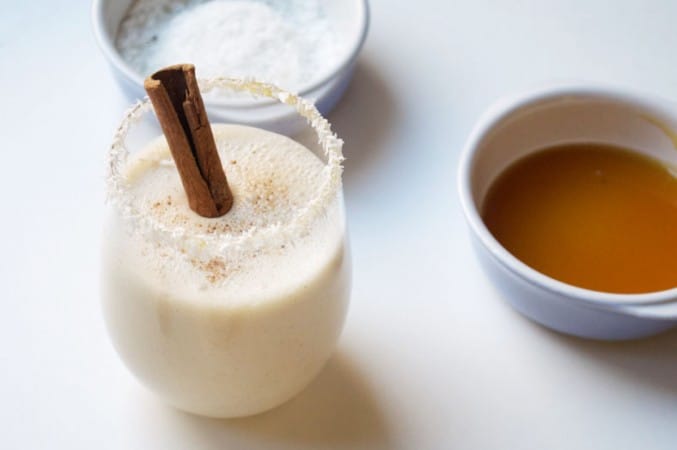 Sure, the holidays are a prime time for great food and indulgent eating, but that would be only half of the tale.

We couldn’t tell you why it’s this way, but the holiday season makes way for festive drinks to come onto the scene. The Germans have their gluhwein, the Swedes swill their glögg, and the Americans love their eggnog.

Even in the warmer weather of Puerto Rico, you’ll easily find a fun, festive local spirit too, and we can promise that one sip of coquito will have you hooked for many Christmas futures to come.

On the surface, the recipe for coquito is as boricua as it gets. Take two abundant local ingredients like rum and coconut, mix them together, and you have a bona fide Puerto Rican invention, right?

As it turns out, that’s only half the story. For the other half, we’ll have to start our trek halfway across the world.

The Parsis and their Panch

There’s a theory that suggests that the modern recipe for coquito involved the mashup of the local sugar cane industry with a popular food invention from Puerto Rico’s American neighbors. Theories like this seem to be valid (and we’ll go into it later on), but it overlooks a key fact: punch as a drink had existed long before that.

Ironically, the genesis of recipes like eggnog, coquito and your typical fruit punch comes from a place that has been more restrictive on alcohol in recent times: the Middle East.

Despite the Islamic stance against alcohol consumption, it’s thought that one of the most important innovations in alcohol development – distillation – came from somewhere in the Middle East. Merchants could have used distillation techniques as early as the Babylonians, but it was definitely a popularized method for alcohol producers by the 12th century onward.

From distillation came a spirit that predates whiskey, vodka, gin, rum and anything else: arrack. Arrack itself isn’t any specific type spirit, rather the word arrack is either a Hindi or Persian term signifying all distilled spirits. Still, arrack served as the base spirit for alcoholic beverages throughout large swathes of the Asian continent.

In the relative center of the “arrack-sphere” were the Parsis, a small subset of Indians who believed in Zoroastrianism. As we saw in our dive into sabzi polo ba mahi and halva-ye-havij, the Persians were the majority believers, though Zoroaster’s sphere of influence did spread past Iran’s borders during the religion’s apex.

Mixing elements of both Persian Zoroastrian and Indian culture, the Parsis developed an arrack-based drink called panch. Coming either from the Persian word panj or the Hindi word panch for the number five, this drink recipe contained only five ingredients: arrack, sugar, lime juice, water and various aromatic spices.

Unlike the wine that European traders brought over, panch could be stored and preserved in even the hottest weather in the Indian subcontinent, and soon it became a favorite drink for both Indians and Europeans alike. Somewhere between the 16th and 18th centuries, the recipe made its way into the European mainland, and local adaptations ran their course.

From Panch to Poncha to Coquito

By the time panch made its way to Europe, all the European nation-states had developed their own capabilities for creating distilled spirits. The Scotch could make whisky, the French repurposed wine into brandy, and the Dutch were experts of gin.

While the English adapted panch into a brandy-based punch recipe – which would become posset and eventually eggnog – the Iberians down south did things a little differently. The recipe for poncha was originally created on the Portuguese island of Madeira, and it featured aguardente de cana – a distilled alcohol from sugar cane juice – in place of arrack.

Poncha made its way into Spain, and the drink recipe came with the Spanish as they colonized parts of the Caribbean (like Cuba and the Dominican Republic) and South America (like Venezuela and Colombia). Over time, and especially as the sugar cane became a powerfully profitable crop for Spanish Caribbean colonies, another form of distilled sugar cane alcohol became the spirit base for poncha.

As Puerto Rico became a leading force in both sugar cane production and rum manufacturing, it was rum that became the de facto liquor used in spirited drinks.

The Triangular Trade, the Americans and Carnation

As far as coquito is concerned, it’s thought that the modern concept for the recipe developed amongst the laborers in the sugar cane fields. Taking a rum-based poncha recipe as inspiration, the workers combined rum and locally grown coconut to create a refreshing, tasty drink.

The final phase of the recipe’s development, though, required some intervention from the Americans.

In the 18th and 19th centuries while Puerto Rico remained under Spanish rule, it was a very active partner in what was called the Triangular Trade. The Triangular Trade was an economic partnership between New England, the West Indies and the West African coast. West African slaves were brought into the Caribbean basin and sold for molasses and money, which was then brought up and sold to the New Englanders. By the beginning 19th century especially, New England had developed processes for crafting the best rum in the world, some of which would then be transported and sold back in West Africa for slaves as well. Until the abolition of the slave trade in 1873, this Triangular Trade proved to be very lucrative for all parties involved.

The Triangular Trade led to a major development in the “coquito counterpart” in North America, eggnog. Originally a drink from East Anglia (England) called posset, American eggnog swapped out brandy and wine in favor of the cheaper, locally produced rum.

Following the Spanish-American War and 1898 entry of US sovereignty, the recipe for eggnog came along with incoming Americans into the island. Over time, the “ron con coco” drink mixed with eggnog to bring us closer to what would eventually become coquito.

The final innovation happened just a few years later. By 1899, the first batches of Carnation condensed milk were crafted in Kent, Washington. The added sugar content helps to keep the milk from spoiling, which makes condensed milk a very practical ingredient to have in tropical climates. Condensed milk thus made its way into Puerto Rico and quickly into the coquito recipe.

And the rest is history.

One of the real beauties of drink recipes is that they’re very quick and easy to put together, and you still get a ton of flavor in each glass.

Depending on how adventurous you’re feeling (like we were), you can opt to make the process slightly more intensive by making your own condensed coconut milk. If you do, then the entire recipe requires an extra 30 minutes or so to complete. The main reason for this is that you’re going to bring some coconut milk to a boil, whisk in some honey or any other sweetener, and let it reduce by at least 1/3 of its original volume. By that point, you’ll have a goldenrod-colored thickened liquid that is a less processed version of the Carnation classic.

Regardless of whether you take this step or not, though, the next step for preparing coquito is really straightforward. All you need to do is blend everything together.

What we found worked best is to first blend together all the liquid ingredients like the rum, coconut milk, condensed milk and the egg yolks. From there, once the liquid base has been set, you’ll add in your aromatics like ground cinnamon. Blend a few times again, then set it in the fridge to cool down a bit (coquito is generally served cold).

From there, you might want to dress your glass up with a nice rim of coconut flakes stuck on with honey, or you can simply garnish the top of your coquito with coconut flakes, ground cinnamon and a cinnamon stick.

There were a lot of fun recipes to choose from, but in the end we could only choose one to start with. Using this recipe as our reference, we set forth to make this delicious Puerto Rican eggnog equivalent.

From the start, though, we made some changes both to simplify and complicate the process. To complicate, we did make our own homemade condensed coconut milk based off the recommendations of this blogger. Call us a little biased, but we preferred going the homemade route here and coming up with a more unprocessed version of coquito as a result.

One part of the recipe we didn’t really think did much, though, was boiling cinnamon sticks in water and adding it to the coquito. Instead, we found we could achieve the same result – a delicious hint of cinnamon taste – in less time if we simply added a dash of ground cinnamon into the blender with the other ingredients.

While we were at it, we added in two other ingredients from other recipes that came out fantastic in the coquito taste. By adding just a tiny bit of ground nutmeg and vanilla extract, you can end up with a little more of a “festive flavor.”

Other than that, there’s little else that you’d need to create a delicious drink like this coquito. Pair it with some lechon asado or arroz con guandules, and you’ve got one fantastic Puerto Rican Christmas celebration ahead!