Even in Arizona, it’s starting to get colder.

If there’s one type of food that I strongly associate colder weather with, it’s soups, especially the thicker, warmer, and more wholesome kind.

With the colder air upon us, Heather and I narrowed our recipe search to delicious looking soups that ideally used seasonal (and very nutritious) ingredients.

And that’s how we found this kabocha squash soup.

What is Kabocha Squash?

Kabocha squash – often called “Japanese pumpkin” – is Asian cousin to the more common type of butternut squash we find here in the US. They don’t exactly look the same, though. Kabocha squash looks more like a small green pumpkin (hence its nickname), while butternut squash has a more beige skin and is more oblong in shape.

Nutritionally, it’s kabocha squash that’s the winner between the two too. A cup of kabocha squash has fewer calories and carbs than that of butternut, and it’s a greater source of beta carotene, iron, and vitamin C. Beta carotene, by the way, converts into Vitamin A, which is really as vital as it gets to maintain and improve our health and immune system.

Taste-wise, I do personally think kabocha squash wins out here too. It has a light and fluffy – almost sweet – taste to it, a taste profile that translates really well into this soup recipe. On top of that, the skin of this kabocha squash is edible, whereas that’s not really advised for most other types of squash. When testing the original recipe, we followed very closely “by the book” to see how the soup is supposed to taste (delicious, of course). But there is a lot of dairy in the soup, especially heavy cream, which we figured might counteract the nutritional benefit of the kabocha squash in the soup.

With our second attempt, we did a “cup for cup” swap of dairy ingredients for alternatives. Instead of butter, we used coconut oil. Instead of regular milk, we used almond milk, and instead of heavy cream, we used full coconut milk. Still really tasty… although it was more runny and less filling than the original recipe yielded.

But by our third attempt, we found the sweet spot, and it was actually pretty simple. All we did was change the proportions of the almond and coconut milks (which you’ll see in the recipe), and we were back to the regular consistency of the original soup. Hooray! Making the soup itself is actually a fair simple process. The first step is to cook down the onions and squash (and coating with coconut oil) in the vegetable broth until they are softened. From there, you get to the creamy consistency of the soup by blending the soup down to a smoother puree, and then it’s time for the almond and coconut milk. Piece of cake! 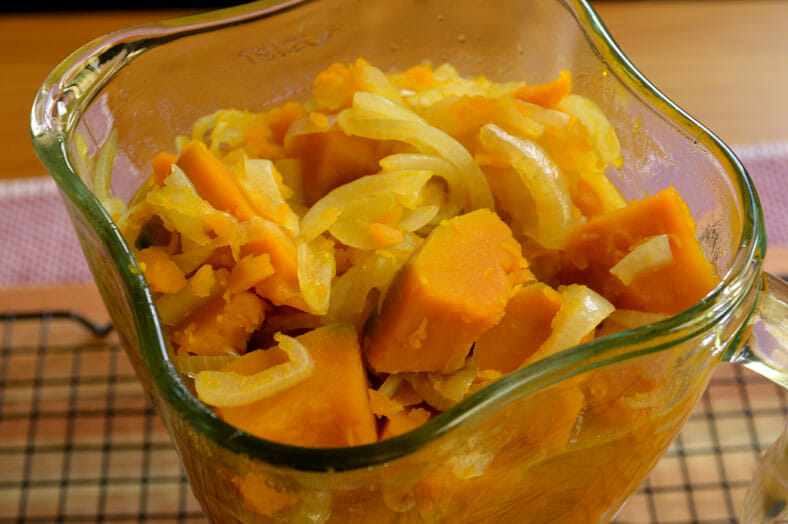 As we head into winter, I can gladly say that these recipes – both the original and our “dairy free” versions – are wonderfully nutritious, delicious, and perfectly filling keepers… especially when garnished generously with parsley and red chiles. Kabocha Squash Soup is made with kabocha squash and coconut milk.