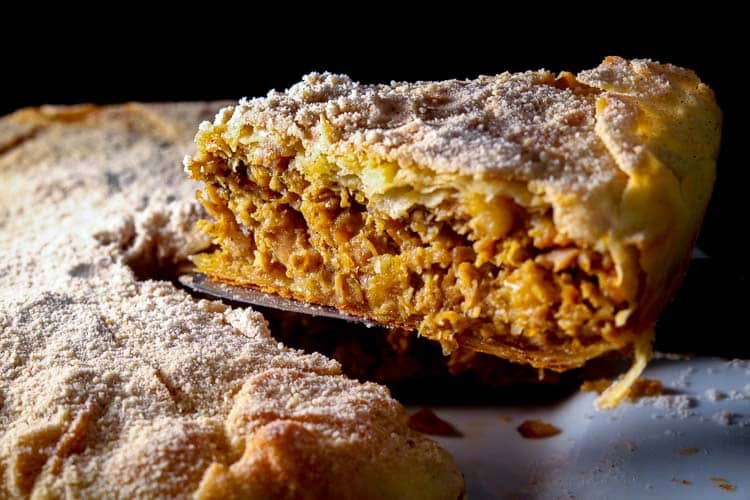 Moroccan bastilla (variously known as pastilla, b’stila, bestila and bisteeya) is a flaky pie usually filled with pigeon cooked in sweet and salty flavors and spices. In Morocco, bastilla is actually an appetizer, and given that the season of overindulgence is nearly upon us, we think it’s only appropriate to add this hefty poultry pie to our holiday dinner arsenal.

The sweet-spicy-saltiness of the bastilla is a common feature of Moroccan cuisine in general, which, thanks to its position at the confluence of the Mediterranean and the Atlantic, has been at the crossroads of traveling flavors and cooking methods for centuries .

The Imazghen – or nomadic Berbers – have traversed Moroccan soil for thousands of years and can claim to be the country’s original inhabitants. The food of the Berbers has laid the foundations for Moroccan cuisine: their migrant lifestyles required a simple cooking style, hence the ubiquity of the one-pot meals like tagine and couscous in the region.

There are some whispers of a spiced chicken dish stretching back to Berber stoves that might have been a precursor to bastilla, though pastry would not have been used until it was introduced by the Arabs in the Middle Ages.

Arab invaders arrived in Morocco in the late 7th century and the existing population slowly assimilated to Islam. Kings of trade, the Arabs brought with them goodies from the east – spices such as paprika, turmeric, cinnamon, ginger and cumin, as well as grain for making various breads. The Arabs were in turn influenced by the Persians whose penchant for nuts and dried fruit also made its way out west to Morocco.

To get to the roots of bastilla, however, we need to hop over the Straits of Gibraltar and into the heart of medieval Spain which was then an Islamic Caliphate. From the 8th century onwards for the next 700 years, various parts of the Iberian peninsula that are now Spain and Portugal were under Muslim rule. Culturally fecund and religiously tolerant, this state was mostly peaceful and prosperous.

Hell slowly broke loose, however, when Christian armies started invading the peninsula and grabbing land from the Muslims. The Muslim territory shrank and continued to shrink, with the losses of Aragon in 1118, Valencia in 1238, and Granada in 1492. At first, the conquering Christians required the Islamic population to convert to Christianity. This created a class of people called the Moriscos: Islamic converts who nonetheless had trouble completely assimilating.

At the beginning of the 16th century, the Spanish Christians decided to exile the Muslims altogether, and many wound up south in Morocco. They brought with them their traditions and their food, one item of which was purportedly bastilla, a dish particularly at home in the town of Fez, where a large number of the Andalusian exiles settled.

Although bastilla didn’t really live on in Spain, traces of the dish have been found in other parts of the world that suggest it was exported along with the country’s expelled people during that expulsion period. A Turkish-Jewish dish called pasteles and an old Syrian dish called pastelis are both vestiges of a pie that left home many centuries ago.

In order to simplify the process of making a bastilla, we’ve decided to follow two common changes to the core principle of the original dish: firstly, we’re switching out pigeon for chicken, which is what a lot of Moroccans choose to do today too. It’s easier to buy and, as good and gamey as pigeon can often taste, we admit we find it hard to get past thinking of pigeons as feathered vermin. It’s a foible that we do not apparently share with Moroccan royalty of yore who loved the bird so much they would stuff dozens of them in one go and pile them high on golden platters for palace feasts in Fez, Meknes, Marrakech and Rabat.

We’ve also decided to use phyllo pastry rather than the traditional warqa pastry, since it’s more practical to buy it ready-made. Preparing warqa pastry would warrant a blog post in itself; getting the right thinness and delicacy of the pastry sheets is time-consuming and involves bashing the dough against a metal pan heated over a charcoal fire.

Get your ingredients ready. We recommend getting chicken thighs without the skin and with bones and marinading them ahead of time. Thighs are the most juicy and tender cut for the pie, and easy to carve up and debone once cooked.

To marinade the chicken, mix it with the ginger, pepper, paprika, salt, and about two tablespoons of olive oil. Make sure you coat all of the meat really well, then put it in a bowl, cover and leave in the fridge for at least four hours and overnight if possible.

Heat the remaining oil in the pan and fry the chicken on a medium heat until it’s evenly seared.

Add the onions and allow them to sweat with the chicken.

Now add the cinnamon stick, saffron, cilantro, and butter. Cover the pan, lower the heat and allow the chicken to simmer for 15-20 minutes. Keep an eye on the pan and don’t let the chicken overcook, since this will dry the meat out, and the bastilla is best when the meat is tender. If you like you can use a food thermometer to check when the chicken is cooked.

When the chicken is done, take the pieces out of the pan and set them aside until they are cool enough to handle. Also remove the cinnamon stick from the pot and discard it.

Meanwhile, add the honey into the pan and caramelize the onions to a jam-like consistency.

Spoon any excess oil out of the pan and reserve for brushing the pastry. This is not necessarily the healthiest option, but it really adds a flavorful punch to the pie at the end.

Debone and chop the chicken thighs. Try to slice them into small uniform sizes to keep the pie from breaking apart when cutting it later on. Return the chopped chicken into the pan and stir in together with the caramelized onions.

Now add the beaten eggs. Continue to cook over a low heat until the mixture is slightly thickened. Keep stirring to keep the eggs from curdling and having your chicken look like scrambled eggs.

Preheat your oven to 375F. Brush the bottom and sides of a 9-inch pie pan with a mixture of the oil from the pan and the clarified butter. We found that the ingredient quantities worked perfectly for a 9-inch pie.

Lay 5-6 sheets of phyllo in the pan, going clockwise and slightly overlapping, brushing each sheet generously with the oil and butter mixture. Allow the ends of the phyllo to well overlap the edge of the pan, as you’ll be folding them back in again later.

Now add the chicken mixture to the middle of the phyllo sheets. Spread it nice and even.

Fold the overhanging phyllo sheets towards the top and center of the pan to close the pie. Add more oil. Bake for 30 minutes, then take the pie out of the oven and slowly flip it out of the pan onto a rimless baking sheet. Now put it back in the over for another 15 minutes. This is a little tricky, but trust us, it’ll make for a more even browning of the pie.

The last step is to prepare the dusting for the top of the bastilla. Combine the powdered sugar, slivered almonds and cinnamon powder in a food processor (affiliate link) and pulse until you get a fine powder. The reason we suggest using slivered almonds is that using whole almonds would mean a longer processing time, which would generate more heat and in turn add moisture to the sugar mixture.

Sprinkle the sugar and almond mixture on top of the bastilla, maybe using a small sieve for even distribution.

Allow your bastilla to cool a little before slicing, but do try and serve it while it’s hot and delicious. We dare you to try and leave room for a main course!

We’re going to just come out and say it: we loved this bastilla and it’s probably the best savory pie we have ever tasted. It strikes a great balance between being satisfyingly meaty and fragrant, perfectly set off by a very crisp crust. The sweetness from the almond sugar also really blended well with the savory pie filling, making for that spot-on sweet-savory taste.

Even though we circumvented the prospect of the traditional warqa pastry by using phyllo, we still found that part of the recipe to be a bit of a challenge. The only secret we can think of would be to handle phyllo while it’s still cold, which means knowing where you’re going with it and working quickly.

Our source recipe called for using Smen, which is a kind of fermented butter frequently used for cooking in Morocco. If you can’t get hold of it, we suggest regular or clarified butter. The same applies to the Moroccan spice Ras el Hanout – if you’re unable to find it in your local store, paprika is a pretty good substitute.

For the meat filling

For the almond sugar