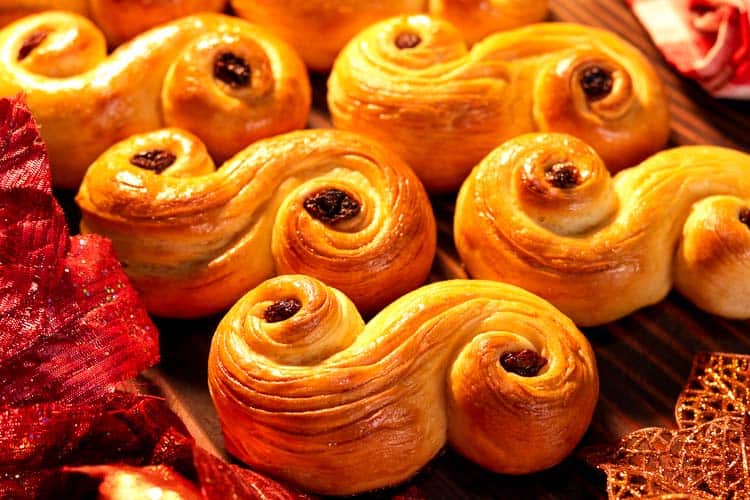 Saint Lucia buns are Sweden’s answer to the mid-winter blues. Spiced with saffron and curled into a distinctively feline S-shape, consumption of lussekatter (literally, Lucy’s cats) peaks around 13th December, which is the day of the festival of Saint Lucia and the start of the run-up to Christmas.

The poet John Donne might have said it best when he described Saint Lucia’s day as being ‘the midnight of the year,’ with the sun being ‘spent’ and sending forth only ‘light squibs,’ while elsewhere, rather gloomily, ‘the world’s whole sap is sunk.’

With the spent, squibby Stockholm sun barely putting in a six-hour day this time of year, Swedes take to their kitchens and beat the darkness by lighting up their stoves: glogg, a sweet mulled wine, is a seasonal favorite, as are pepparkakor ginger cookies and a special rice porridge called risgrynsgröt. But it’s the saffron-infused lussekatter, Saint Lucia buns, that have caught our attention this week, for their strange symbolism as much as their unique flavor.

THE STORY OF SAINT LUCIA

The story starts with the buns’ namesake Saint Lucia, or Lucy, herself. Born in Sicily in the 3rd century to a wealthy family, Lucia had sworn to keep her virginity for Christ and, after having a vision of Saint Agatha at Catania, a place where she had made pilgrimage with her sick mother to cure her of a hernia, persuaded her parents to give away a large proportion of their money to the poor.

Lucia had an arranged fiancé who was disgruntled with every aspect of this situation. He decided to take advantage of a campaign being waged on Christians at the time by Emperors Diocletian and Galerius and reported his betrothed’s religious inclinations to the authorities.

The law’s way of dealing with self-declared virgins in those days was to force them into prostitution, which was the sentence conferred upon Lucia.

When she refused to budge towards the brothel, Roman guards surrounded her with kindling and tried to set fire to her, but she wouldn’t burn. So a soldier thrust a sword into her throat, but still, she didn’t die, and eventually only passed away when her last rites were read to her.

The horror of Saint Lucia’s stories don’t end there – she also supposedly gouged out her own eyes on one occasion or had them gouged out as a form of torture in another telling. For this reason, she is the patron saint of sight, and light, by dint of her name which is derived from the Latin ‘lux.’ If you look at a traditional Saint Lucia bun sideways, the curled up cat shape might morph into a pair of spiraled eyes with raisins for pupils, an echo of the spiral shell forms from Italy called ‘gli occhi di Santa Lucia.’

Lucia’s story made it to northern Europe as the Vikings were slowly converted to Christianity, from the 9th century up until the 12th. But when Lucia got to Scandinavia, she encountered a distorted, almost inverse pagan image of herself in the legendary Lussi, and it was the coming together of these two Lucys that laid the foundations for the modern tradition of December 13th.

Lussi was a dark malevolent female spirit who roamed the land during the dark winter nights, looking for wrongdoers to punish. She was at the height of her dark powers on the night of the winter solstice (this used to be December 13th, according to the old Julian calendar; Saint Lucia’s day remained on the 13th when the new Gregorian calendar nudged the winter solstice up eight days in the 18th century) when she would particularly look for folks with unfinished tasks upon whom she would unleash savage fury. As a result, 13th December became a kind of national deadline for getting things done, for fear of Lussi smashing the house chimney.

This is where the lussekatter come in: if you did have to go out on Lussi Night (or if you hadn’t gotten around to fixing that switch on the bedroom gas lamp), you’d be sure to keep with you a bag of these buns, as the saffron was said to chase away the evil spirits.

It’s also worth mentioning that up until the end of the 19th century, lussekatter were mainly known as dövelskatter, which means ‘the devil’s cats.’ The plot thickens: Lussi was usually accompanied by a mob of other angry demons who helped her in her quest for reckoning. Together they were known as Lussiferda, and it doesn’t take a bottle of glogg to make the etymological jump over to the dreaded Lucifer.

Like Saint Lucy, Lucifer’s name also comes from the Latin ‘lux’ for light, as the fallen angel was named after the morning star and deemed a carrier of light. And did we mention that the Biblical Adam’s first wife (wait – whaaaat?!) Lilith was also called Lussi in Scandinavia and was portrayed as a spirit of darkness blighted with uncontrolled sexuality and a penchant for stealing babies?

This confusing spiral of mythologies and circular etymologies has culminated in a much simpler-looking winter custom in Sweden today that traditionally sees the eldest daughter of each family rise on the morning of the 13th December, don a white robe (probably a Germanic tradition of invoking the innocent Christ-child) with a red sash around the waist (symbolizing the blood of Saint Lucia) and distribute Saint Lucia buns to the members of her household.

School usually finishes early on the 13th so folks can celebrate, while candlelit processions are made through Swedish towns of young girls in long white robes, headed up by a nominated Lucia. The Lucia stand-in wears a wreath of lingonberry branches on her head topped with a crown of candles that harks back to the story of the saint descending into catacombs to help Christians escaping persecution while wearing similar headgear, a precursor to the humble head lamp.

Call us crazy, but the idea of a young girl balancing naked flames inches above her long flaxen hair looks like a far more terrifying hazard waiting to happen than the prospect of an ersatz evil Justice League shimmying down our chimneys and rapping our knuckles for not having finished the vacuuming.

Although it’s the smallest ingredient, it’s the saffron inside the Saint Lucia Buns that really drive the taste home and that give the buns their unique flavor. You can use saffron powder or strands, but if you go for the strands, be sure to crumble them well before you start.

Our recipe is for eight buns, as we think making them in smaller batches and eating them fresh yields optimum results, however, you can also make a larger batch, freeze them and then reheat them when you are ready to eat them.

Their shape might be a little tricky to get right, but we are nothing if not determined! With the associations to Saint Lucia’s eyes and the Devil’s cat, we feel that getting the S-shape spiral just right is a very integral part of a successful lussekatter. However, if it really is too fiddly, feel free to err on the side of simplicity and make your buns nice and round.

Our recipe calls for regular flour, but we think these Saint Lucia buns would fare very well with gluten-free flour too.

Measure out everything you’ll need for the Saint Lucia buns ahead of time. As with all baking, it’s important to get the quantities and measurements just so.

Pour the milk into a pan over medium heat and add the butter and saffron. Stir until the butter is melted.

Let the mixture get to a just barely a boil, then take it off the heat. Allow it to cool to body temperature, then add the yeast, followed by the sugar and salt.

Add half of the amount of flour to the mixture and stir well. Adding the flour slowly while mixing will help avoid getting any lumps. At this point, you can beat the egg and stir that in too.

Keep adding flour as the mixture thickens into dough.

When the dough is soft and pulls away easily from the edges of the bowl, you’ve added enough flour. Take the dough out of the bowl and roll it into a ball.

Now place the ball of dough in a lightly greased bowl, cover, and leave to rise at room temperature for about an hour.

The dough will likely double in size, so make sure you picked a big enough bowl!

Roll each ball out into a long snake-like shape. Try and keep the thickness even.

Now roll into an S-shape. Do you see the curled up cat? Or Saint Lucia’s eyes?

Evenly space your devilish kittens on a baking tray, cover them lightly, and leave them for another hour to double in size again.

Now decorate them with raisins and brush over them with a beaten egg. Bake them for 15-20 minutes on 375F.

You’ll know your Saint Lucia buns are done when they get a nice golden color throughout. Let them cool and eat them while they’re fresh – with coffee, hot chocolate or even a jar of steaming glogg – or pack them in a box should you need to throw them at any demons on the night of the 13th. Just make sure you get all the housework done before then!

We really loved the texture of these Saint Lucia buns. As far as we’re concerned, they struck the perfect balance between density and airiness, with pretty much the perfect bite.

The saffron flavor is quite subtle, and when we experiment with lussekatter again, we might try adding some more aromatics like ground ginger or cardamom.

Given that we’re not cooking for a huge family, we found the quantities in our source recipe to be a little excessive and cut them down to make just eight buns. It’s also worth mentioning that we found some other versions of the recipe that suggest adding whipped cream or cream cheese to the mixture, which is not in the least bit a bad idea. If you do so, add in about 2/3 of a cup just after the butter boils, when you take it off the heat. Adding whipped cream will make the texture of the lussekatter more airy, while cream cheese will give you a flakier bite.

The trickiest part of the process for us was getting the shapes of the buns just right. We persisted, but we’ll forgive you for throwing in the towel if it gets too tricky! Simple round buns will taste just as good!

Step 1: Make and Prep the Dough